The VidiStream application and its core functionalities are described in detail in Multimedia Content Delivery with VidiStream [ENT 22.1 ARC]. Instances of VidiStream serve one or more of the following different purposes which are called modes from here on:

The following table gives an overview on the various aspects of the three modes of operation before going into detail regarding their differences.

The following sections give an overview on the overall VidiStream architecture when hosted in Kubernetes.

Separation of Modes in Kubernetes

As shown above there are different aspects to all three available modes of VidiStream which justify treating them distinctly. But foremost, the most important distinctions are resource and load balancing requirements.

Since the rendering functionality has much higher requirements on resources than the other two modes it shall be independently scalable on dedicated hardware matching the high resource requirements in a productive setup.

When looking at the aspect of load balancing on the highest level there may exist any number of VidiStream instances which have access to the same set of arbitrary storages. Client requests for streaming are then directed to one VidiStream instance which in turn retrieves the requested file(s) and delivers the content.

Unlike other application scenarios, there are additional aspects to consider for streaming due to the imposed physical file access. Most importantly, each access to a file comes with the overhead of opening the source file and retrieving metadata about it such as headers and index positions. Once opened, an instance can very efficiently read bytes from the file but unnecessary opening of files is to be avoided.

The following typical scenarios can be distinguished further:

In the worker-based VPMS system there exists a client-side load balancing where the client applications are aware of all existing streaming endpoints and select them in a round-robin manner. Once a session with a single endpoint is established it is held until the connectivity to the endpoint is lost and then the next endpoint is contacted:

This model lacks several demands that arise from the use cases above. While it does enable to have sessions to VidiStream instances it does not select streaming endpoints efficiently since the client has no knowledge of the server side instance load at any time.

To better match the demands of the use-cases highlighted above, the Kubernetes hosted VidiStream architecture uses a server-sided load balancing concept. Instead of the clients selecting amongst available endpoints, in this model one central endpoint is available which clients contact for streaming requests and which determines the best suited load balancing strategy for the request.

This endpoint is realized as a Kubernetes Ingress. The ingress controller responsible for the endpoint then is responsible to appropriately distribute the stream requests to the internal VidiStream instances running in the Kubernetes cluster.

In the stream mode, however a 1:1 connection between VidiStream instance and file access is favorable only up to a certain amount of parallel accesses to the file (scenarios 1 and 2). Preventing to overloading instances then is more desirable than keeping the same connection established at all cost since in this case even though file opening is reducing performance it is still justifiable.

Note that the ability to create new sessions to a backend VidiStream instance in case an existing one abruptly fails must be present in all clients and modes. Client applications must not fail permanently to work (requiring re-login or restart) in case of a server becoming unavailable. A longer reconnection time deteriorating the user experience might be acceptable in the event that a VidiStream instance becomes (temporarily) unavailable.

Session based strategy and Consistent Hashing

While it would be technically possible to work with HTTP based sessions to establish a session between client and VidiStream instance, this would neglect the fact that individual file accesses shall be bundled by dedicated VidiStream instances. Given two clients requesting the same file, they are likely to get HTTP sessions with different VidiStream instances if the load balancer routes in a round-robin, random, connection-count based or any other more generic fashion. While each client will stick to his HTTP session and hence VidiStream instance to access its file the file opening overhead is unnecessarily doubled.

The unique way to establish a 1:1 relation between VidiStream instance and accessed files is to base the load balancing on the clients request URI for a file to stream in stream mode. Fortunately the same approach also is usable to establish 1:1 sessions between clients and VidiStream instances in the session based scenarios. Obviously the routing of requests to VidiStream instances can not be based on the complete number of URI segments present but only on the given depth of segments that form the stable identifiers:

In order to guarantee a strict session binding between client and VidiStream instance the Consistent Hashing algorithm is applicable. In a simplified sense, with Consistent Hashing the source value (here the URI segments of the given depth forming the stable endpoint) is subjected to a hashing function that consistently associates the source value with one of n target values (here the VidiStream instances available). If n changes the algorithm aims for reducing any re-targeting as much as possible.

Session based render and trickplay modes can most appropriately be covered with the Consistent Hashing loadbalancing method because the sessions need to be stable at all times. Any session loss will cause the client to reestablish the complete session and in the very least produce longer waiting times. Clients need to consider this session rebuilding case but it is generally to be avoided for sake of performance.

Please note that due to the uni-directional hash function the server side load is not considered by this algorithm. It is assumed that sessions are equally distributed amongst VidiStream instances and have an equal resource consumption but in unfavorable scenarios a VidiStream instance might be overloaded, hence the need for a proper reconnection mechanism exists.

The stream mode has no such hard requirement on a session affinity. An optimal solution for this mode would be capable of dealing with the problem where VidiStream instances are overloaded due to too many clients requesting the same file(s), hence taking the actual individual server loads into account. A stable session for clients should be aimed for but not at the cost of overloading instances.

As one of the major video streaming portals, Vimeo was faced with identical problems of optimizing the access to video files. Links to videos in Vimeo also are stable (in essence an URI with the Video ID at the end) and the same problem applies on an architectural level. The goal of Vimeo is to fully utilize caching servers that already have segments of files cached when the same video is requested simultaneously.

Vimeo engineering proposed and implemented a solution based on Bounded-load Consistent Hashing into HAProxy. The highly interesting details can be found here: https://medium.com/vimeo-engineering-blog/improving-load-balancing-with-a-new-consistent-hashing-algorithm-9f1bd75709ed

To summarize, the Bounded-load Consistent Hashing algorithm follows the same strategy as the Consistent Hashing algorithm but at the same time additionally measures the distribution of the total load to each active instance at any time. When exceeding a configurable relative instance load (the “range of acceptable allowed overloading”) the algorithm routes traffic to another instance while the overloading is taking place. The speciality of the algorithm is that the instance that is targeted next in case of overload is again stable, meaning that excess traffic is not scattered around but at most two instances serve the same file then, making it an efficient solution to the problem.

Consequently, when serving in stream mode the Bounded-load Consistent Hashing algorithm is utilized.

Due to the different demands on each mode that were highlighted it is required to deploy individually scalable Kubernetes deployments for each individual VidiStream mode in productive scenarios where many users need to be served. This is the default setup that comes with the products Helm chart.

The following diagram visualizes this productive setup of three separately scalable VidiStream deployments based on their mode: 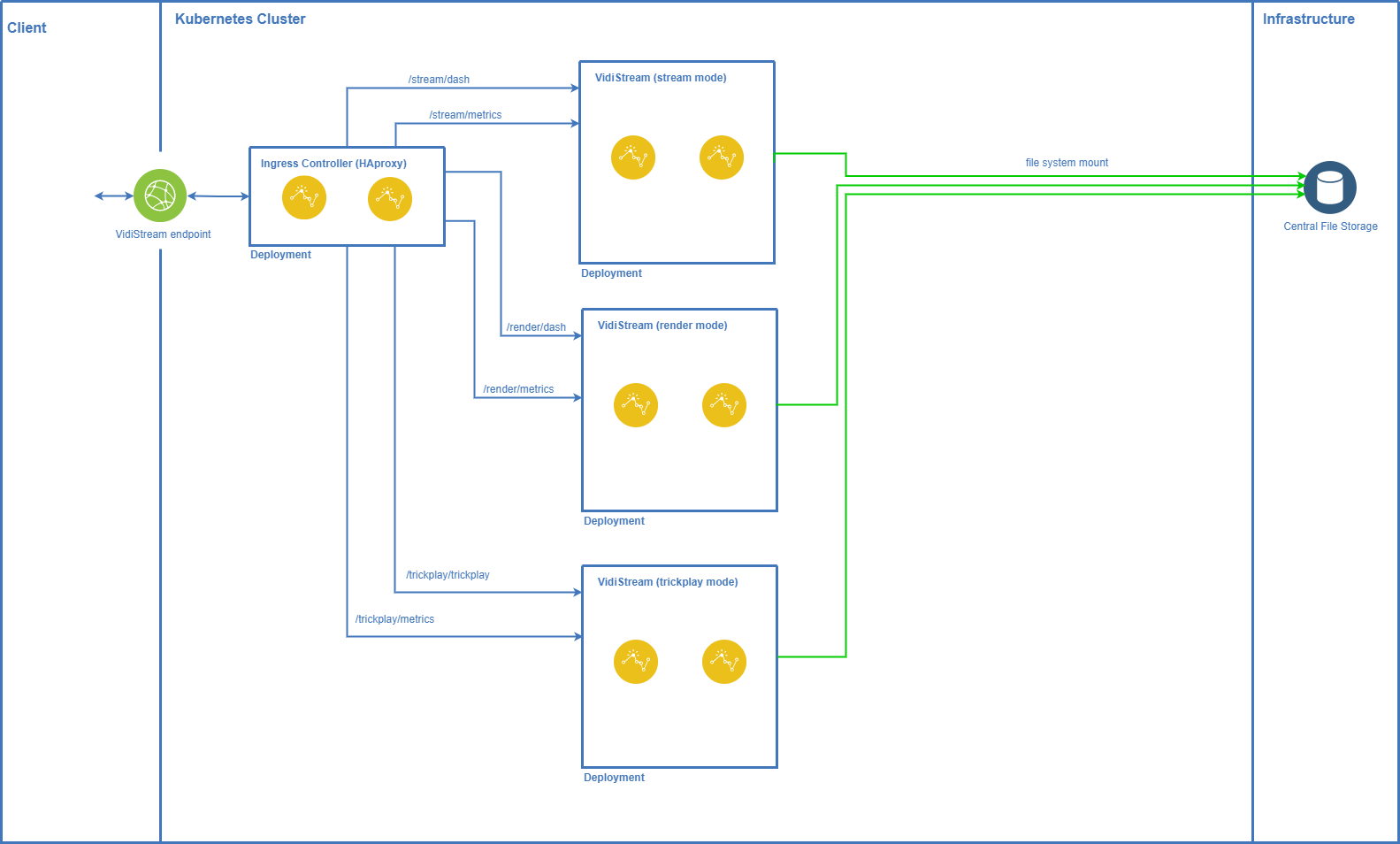 When running VidiStream in Kubernetes it is crucial to also consider the clients that depend on VidiStream in the overall architecture.

Notable advantages of this approach are:

The following table summarizes all routes that shall be available at the same DNS address/hostname (depending on whether the client is a part of the system or not): 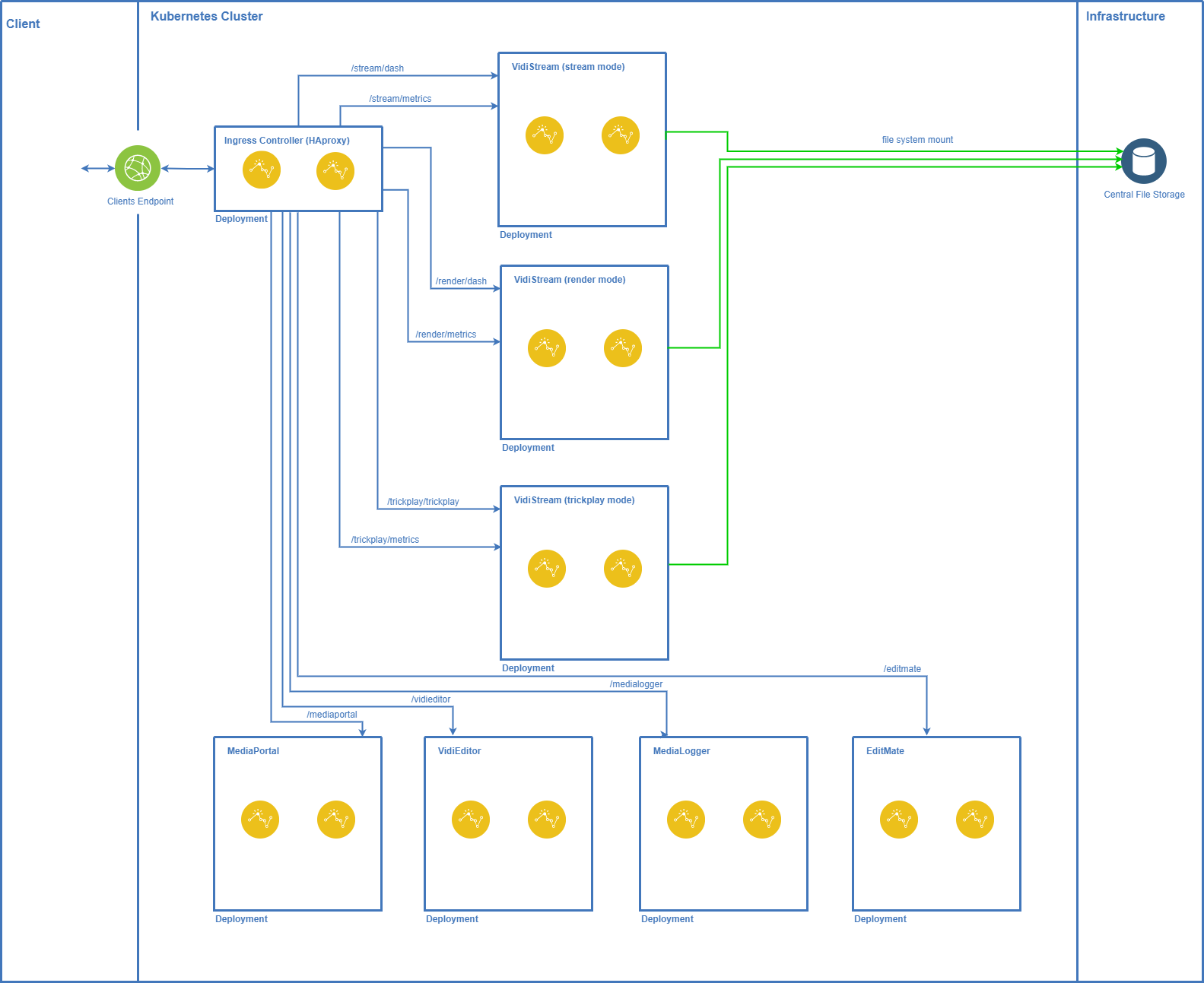